I worked with a colleague once that used the expression: “Is the view worth the climb?”   That’s an interesting expression and a very visceral way of expressing the fear that we all have when undertaking a new project in our companies. New projects always require not only capital in the form of money, but also to human capital in the form of resources, emotion, and hard work. Careers can be made by a successful project… or destroyed by a major project gone awry.  Is the view really worth the climb? Will the rewards be worth the effort?

For example, it’s easy to say that people should work on increasing their profit by reducing their product cost. We all understand that this intuitively seems like a good thing to do. Mathematically, who can argue? If you reduce your product cost, you create profit that drops the bottom line. The question is: how much profit will drop to the bottom line? Is the view worth the climb? 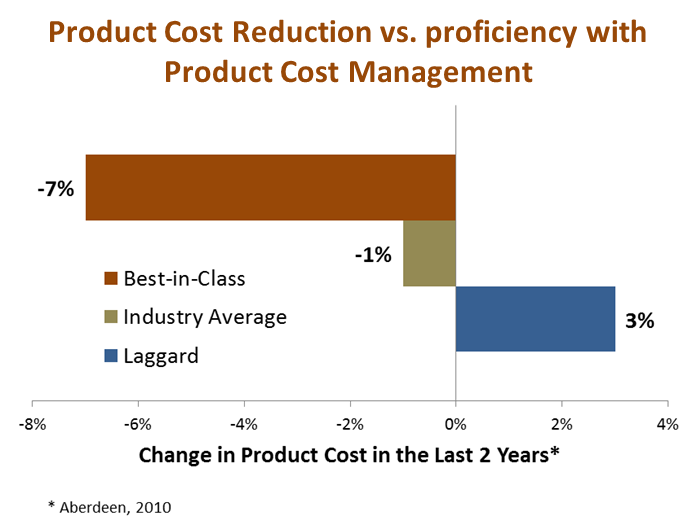 To answer this question, let’s take a look at a graph we made of data from a 2010 Aberdeen study on product cost. The graph shows the average effect on product cost over two year period for companies. The companies were broken into the standard three Aberdeen categories (Best-in-Class, Industry Average, and Laggards) based on other criteria of how they manage their Product Cost Management efforts.

Let’s put this in perspective. The table below shows an example company with $10 billion in revenue, 80% product cost (as a percent of sales), and a 5% net margin. On an annualized basis, the difference between best-in-class and the industry average is the difference between $560 million and $80 million, respectively, of extra profit. Note also that the laggard’s product costs increased 3% per year equating to a $240 million profit loss. 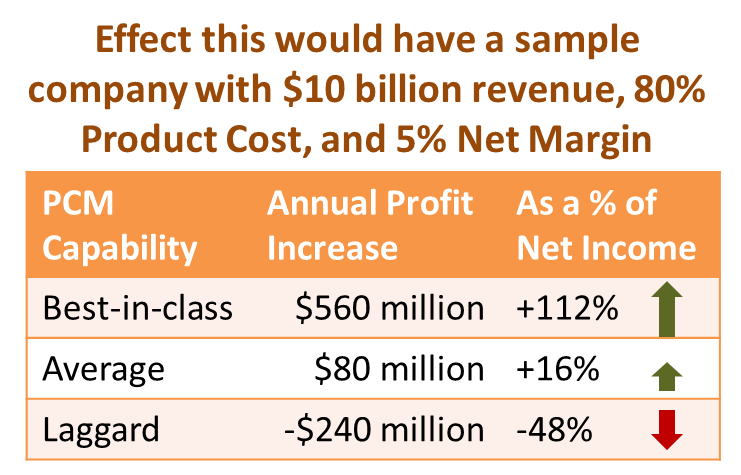 These numbers represent the view (the results), but what about the climb (the investment)?   The Aberdeen study does not investigate this. However, one should ask:  how much money *should* the company be willing to invest to capture an incremental $480 million per year of profit? 100 million? 50 million? $25 million? What about $10 million? Would your company even invest $10 million?

It’s something to think about.

If Your Company Does Product Cost Reductions, It’s Already Too Late