I just read the following article and was smiling wryly while experiencing a BFO (blinding flash of the obvious).

The Death of Core Competence Thinking

This article talks about the slow… the FAR too slow… death of “Core Competence” thinking.  This is the concept that organizations should only focus on the 1-2 things that they are best at, e.g. marketing, and everything else should be “outsourced.”  This idea was pushed with a passion after the release of The Core Competence of the Corporation by C.K. Prahalad and Gary Hamel of Harvard Business School.  I guess as an HBS graduate myself I have to now bear the sins of my forefathers?  Actually, these concepts go back further to the work of the famous 18th century British economist, David Ricardo, who perfected the idea of “Comparative Advantage.” 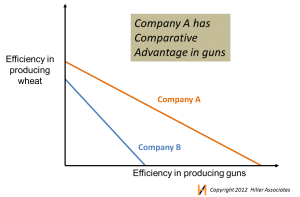 If the chart isn’t clear, here’s a great video teaching explanation of Comparative Advantage to a background soundtrack of AC/DC; I bet your micro economics class was never this fun.

Until the last ten years, companies have been terrible at calculating, realizing, and internalizing the Total Cost of Ownership of outsourcing.  I.e. product cost is not only about the price paid for the part, but additionally, shipping, logistics, quality/inventory risk when you have 6 weeks of parts on the ocean, inventory costs, the friction of dealing with foreign cultures with different languages in vastly different time zones, etc.  Even when firms began to calculate these costs, TCO started a cultural conflict with the proponents of outsourcing and core competence.

Enter the low key and industrious Japanese.  Actually, the Japanese were a force on the scene since the 1980’s, but people did not really internalize the Japanese concept of “Lean” (click for video explanation) manufacturing until the mid-1990’s.  Lean has many useful concepts, but two striking features of the Lean manufacturing are (1) to have one’s suppliers geographically as close as possible to the upstream plant and (2) to often own part or all of the suppliers.

In other words Lean ~= Vertical Integration.

But how does Vertical Integration = better Product Cost Management?  Check back next week!