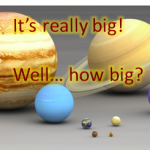 Synapsis:  No matter how badly you think you are pinned down in a pricing negotiation, there are always tools for leverage that can help you improve your position. Relative should costing is one of these powerful tools.

Or, you can read the full article below

Relative Cost Power – How to not know the cost of your products and win negotiations, anyway

With product cost accounting for 70 to 90% of every revenue dollar on the income statement, it’s not hard to understand why cost is such a big deal to many companies. In the last decade, there has been a renewed focus on the world of Product Cost Management, including techniques like Design for Manufacturing (DFM), Should-Costing, Spend Analytics, etc. Many of these techniques are used (or are intended to be used) *before* the sourcing phase of the Product Life Cycle. While procurement professionals should be involved up front in product design, a lot of the responsibility for success with these techniques will rest on the design engineering staff.

Regardless of whether your company is best-in-class in Design-To-Cost, or whether you have the most cost-oblivious design staff in the world, your designs must be eventually made or bought. With the dominance of outsourcing, it’s more difficult than ever to know what the should-cost of a product is? Purchasing agents are told that they should know the should-cost of products before they walk into a negotiation with a supplier. However, that is not easy, and the fact is:

Your supplier will typically know more about their costs than you do.

So, how do you precede in a negotiation where your supplier has more and better information? Are you completely at their mercy? And, what if your supplier holds oligopoly, or even monopoly, supplier power? Are you just a price taker?

ANSWER: No, you don’t have to be a price taker, at least in the case of buying multiple variants of a similar spend item.  Recently, I wrote a blog post about how the human brain does not like non-linearity, discontinuity, or non-monotonic functions. This is a fancy way of saying that people are very good at detecting pricing inconsistencies within multiple similar products.

This inconsistency is the key to being able to better control a negotiation, in which you really don’t know what the absolute cost of a product should be, or where you know the should-cost, but have little buyer power. Let’s explain this with an example:

In the late nineties, I had the privilege of being the product development owner for the drivelines (axles and drive shafts) used in the full-size pick-up that was best-selling vehicle in the world for over 30 years. This truck made over 100% of the profit for my employer (making up for losses on other vehicle lines). I was very young and inexperienced at the time, so it was a great experience, but a big challenge.

Within the first few weeks in the assignment, I was told that it was time to negotiate the contract for the driveline commodity (over $450 million annually) for the upcoming 2004 vehicle. I was told that this was a very complex process, but that the purchasing group would lead it. However, my first meeting with our purchasing team lasted about 10 minutes… long enough for the purchasing team to say: “Oh, your supplier is *that* supplier? We don’t get involved with them. Have a nice day.” And, they walked out of the room.

After the shell shock of the experience wore off, my manager explained that our supplier was the former components division of our employer (the OEM) and that our CEO had desperately wanted to spin-off the component divisions from the OEM. To do this, our CEO had negotiated a deal with the powerful automotive union, agreeing that the union members would technically work for us (the OEM), but be leased to the newly spun-off supplier. If the OEM did not give enough business to the components supplier to keep the union members employed, the OEM was responsible for paying them a large portion of their wages, while they waited to be deployed somewhere else.

Effectively, this removed almost all negotiation power from us, the OEM. Therefore, our purchasing team had made a decision at the executive level to not participate in negotiations with this particular supplier. Instead, these negotiations were dumped into the laps of the product development team, with some support from finance.

The product development team had its own problems already. The marketing team were demanding much better performance and quality out of our parts. But, the finance team demanded that those parts be cheaper than the previous generation of parts! And now, we had an AWOL purchasing team. In terms of the old Porter’s Five Forces framework, our supplier had tremendous supplier power! What to do?

I certainly was not an expert in drivelines yet, but I had just completed a master’s thesis focused on product cost. So, I first reached out to the cost estimation team within the OEM. They helped us understand what the absolute cost might be for a driveshaft. We were also able to negotiate with the purchasing to do an “unofficial” price study with other driveline suppliers.

Our first negotiation with our supplier (the OEM’s former component divisions) was pleasant, but utterly futile. I excitedly explained what we thought the absolute part cost of these driveshaft parts should be, and hinted that we had quotes from other suppliers to prove it. Our supplier, being quite shrewd, politely explained why their product was, obviously, so much more valuable, combined with a tangible undercurrent of, “Well that’s nice that you have should-costs and quotes from other suppliers, but we really don’t care, because you have to use as a supplier regardless.”

Relative Should-Cost to the Rescue

Now what were we going to do? These lines of argumentation (absolute should-cost and competitive quoting) were not prevailing on the supplier. So I tried something different: Relative Should-Costing. 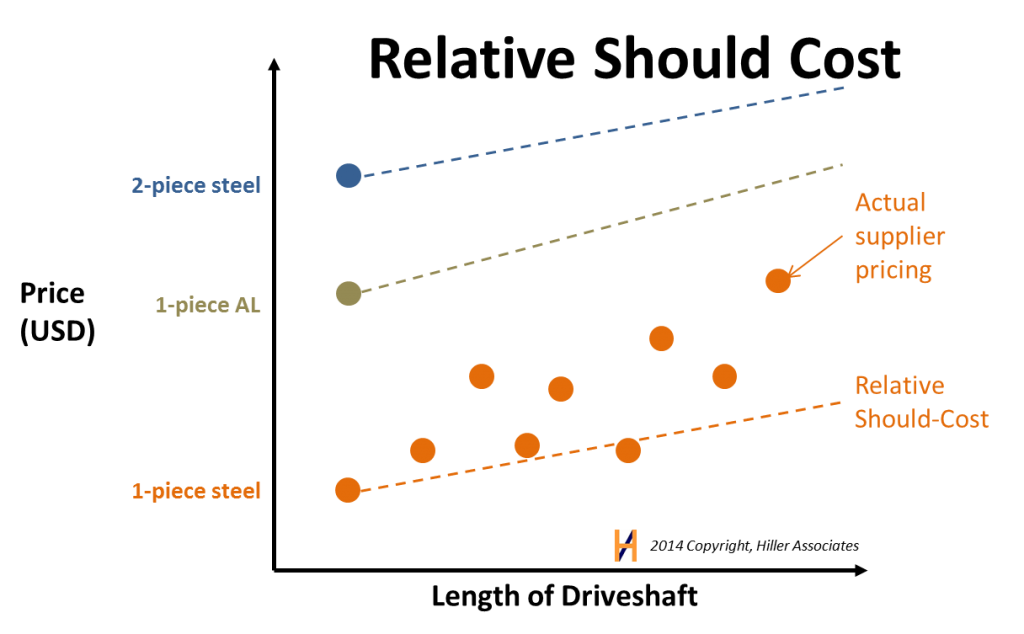 A driveshaft is complex in many ways, but in reality, it is a modular part design. It’s constructed mostly of the end yokes coupled with an extruded or seam-welded tube between those yolks. If we had a longer truck we simply extended a tube. (For technical safety reasons, we had three variants: a 1-piece steel driveshaft, 1-piece aluminum, and a 2-piece steel.)   In total, we had over 70 part numbers of these three designs, and we knew the price quote for each variant.

Using a spreadsheet, I simply estimated a reasonable cost for one driveshaft tube for each of the 3 variants. With this estimate, it was easy to calculate a per-inch cost of that tube. By subtracting, I knew what all the other parts in the driveshaft (e.g. end yokes) approximately cost. That was all I needed. I didn’t need to know what the absolute cost of each driveshaft should be.

I just needed to know what each similar part should cost RELATIVE to another part.

At that point, we started asking how Part B that was 5 inches longer of extruded tube than Part A could cost $10.00 more than Part A, when the tube extension was only worth $0.30. The supplier was not sure and asked for time to investigate. We had several more meetings on the topic, but in the end, the supplier could not give any logical reason why their pricing for similar drive shafts varied in bizarrely non-linear ways.

The supplier reduced the cost of the entire driveshaft commodity by about 8%, resulting in about $35 million a year, straight to the bottom line of my employer, the OEM.

Should the discount have been bigger? Yes. Did my calculations show that the supplier should have given us more money? Yes. But, did we get a significant concession from a supplier who held every card in this negotiation? Yes we did!

In reality, the supplier still could have refused to reduce their costs. However, the point of these Relative Should-Cost negotiation techniques is to bring logic and facts to bear to increase leverage in a situation where you seemingly have no leverage.

The win occurred when the supplier just couldn’t answer why their own pricing was internally inconsistent with itself.

This is a good lesson for suppliers to learn, as well. When quoting a basket of similar parts, it’s wise to make sure that you understand your own pricing and reflect the underlying costs in a logical and linear way to your customer. This greatly reduces the risk of your customer casting doubts and driving your pricing down, perhaps unfairly.

Diagnostic vs. Leverage Tools and Absolute vs. Relative Should-Cost

The case study above is an example of the difference between using a Relative Should-Costing technique, versus an Absolute Dollar Should-Costing technique. If this sounds interesting to your company, you may want to read more in my previous article in Industryweek.com, Your Should-cost Number is Wrong, But It Doesn’t Matter. In this article, we talk further about using should-costing, not only as a diagnostic gage to tell you what the cost is, but as a tool for leverage to move the cost down.

Remember, no matter how badly you think you are pinned down in a pricing negotiation, there are always tools for leverage that can help you improve your position. Relative-Should costing is one of these powerful tools that should be in your tool box.

Your Should-cost Number is Wrong, But It Doesn’t Matter

10 Responses to “Relative Cost Power – How to not know the cost of your products and win negotiations, anyway”