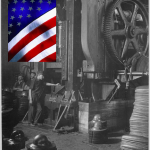 A friend of mine just sent me this article from the much venerated “The Economist” magazine.  Just like the Harvard Business School, the Economist is also interested in manufacturing again.  See their article here:

A third industrial revolution | The Economist

That is pretty encouraging, except that I think the reporters that are covering the subject may be a bit too uneducated on manufacturing, or sensationalistic, or optimistic.    Consider The Economist’s comment about making a hammer on a 3D printer:

That is why the process is more properly described as additive manufacturing. An American firm, 3D Systems, used one of its 3D printers to print a hammer for your correspondent, complete with a natty wood-effect handle and a metallised head. This is what manufacturing will be like in the future.

Yes, maybe in the DISTANT future.  They don’t bother to tell the reader (or maybe they are not aware) that a hammer has a forged head, and I am not aware of any rapid prototyping method that produces objects with the performance of forging.  Then we have the problem that one wants the handle of the hammer to be of a different material, so that it is light weight, unlike the head.  To be fair, the author does admit:

Additive manufacturing is not yet good enough to make a car or an iPhone, but it is already being used to make specialist parts for cars and customised covers for iPhones. Although it is still a relatively young technology, most people probably already own something that was made with the help of a 3D printer. It might be a pair of shoes, printed in solid form as a design prototype before being produced in bulk.

OK, I agree, 3D printers, an other rapid prototyping are very popular in product development.

Star Trek Replicator… or is it a 3D Printer?

Trek replicator (a device that on the show that could create food and other objects ex nihilo).  Then we have this quote about engineering materials:

The materials being used to make things are changing as well. Carbon-fibre composites, for instance, are replacing steel and aluminium in products ranging from mountain bikes to airliners. And sometimes it will not be machines doing the making, but micro-organisms that have been genetically engineered for the task.

Well, yes, but as I look around my office, my house, and the neighborhood in general, I don’t see a lot of stuff made from these exotic materials.  Why?  Because THEY ARE REALLY EXPENSIVE!  Their quote actually is correct, but they don’t explain that these are high end performance materials and from a Product Cost Management perspective should be avoided if at all possible.

The Economist does a much better job when reporting on the world’s financial situation than manufacturing, BUT I in no way mean to discourage The Economist.  Would that they would write more about product development and manufacturing!   And, I hope that they are right that we are entering a 3rd Industrial Revolution, especially for American Manufacturing.  The author’s last sentence, hopefully, will be the truest:

The wheel is almost coming full circle, turning away from mass manufacturing and towards much more individualised production. And that in turn could bring some of the jobs back to rich countries that long ago lost them to the emerging world.

p.s. now that I know the author’s level of manufacturing knowledge, I will see if I can convince him to do an article on my adamantium bonded bones and claws… ok, that was a little mean.  Just kidding, Economist — a valiant attempt to promote the new coolness of manufacturing.

Should your kids go into manufacturing – CNN says… NO.

One Response to “The Economist Joins HBS in Re-discovering Manufacturing”