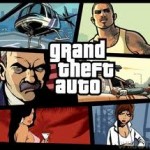 One thing that is interesting about Product Cost Management is that people have different thoughts as to what is included in the product cost.  Is the product cost the raw material, labor, and direct  labor?  What about the capital tooling?  What about logistics and shipping?  Oh, and what about warranty cost or end of life disposal fees for which your firm is responsible?

The short answer is E. All of the above.

In a product and manufacturing firm, everything on the income statement is included in the product cost.  However, the income statement does not easily present a direct association between a particular cost with a certain product.  Hence, accounting came up the concept of “indirect,” “period,” or “burden” costs.  This is accounting speak for, “We’re not really sure how to reliably split this bucket of cost and assign it to an individual product.”  Later, academics and consultants made a lot of money, and caused great pain and suffering, with Activity Based Costing.   This method was invented to try to reasonably amortize indirect costs in a logical way, so that people could call them direct costs.  ABC was a good idea, but in most companies, it was badly implemented in an impractical way that made everyone lose interest in it.

So, what IS in Product Cost?  That’s a tricky question that we may be talking about for a long time.  However, I would like to address one particular cost that is a perennial burr in my bell bottoms.

Imagine you were selling your car and put a “For Sale” sign on it in the parking lot of your company.  Over lunch one day, one of the engineers in your firm walks up to your desk and says he’d like to buy your car.  You might say, “Great!  I’ll make you a deal. It’s $5,000.”   But the engineer looks at you in a confused manner and said, “Oh no, you see, I’m only responsible for the ‘variable’ costs of the car such as gas, insurance, those little pine tree air fresheners, etc.  The capital cost of the car is not my problem.  It comes out of ‘another budget,’ for which I am not responsible.  Can I have the keys now?”  You would not give him your car and might actually ask his supervisor to have the guy checked out for behaving in such an irrational way.

That’s a bizarre story, and no engineer that I know would say something like that… unless they are talking about Product Cost.  I wish I had a dollar for every time an engineer or his manager told me that capital tooling “didn’t matter because that comes out of a different budget.”  Capital Investment and Capital Tooling are real things that cost real money.  However, most organizations treat them as if they are totally different than the variable product costs (e.g. raw material, labor, direct overhead, etc.).    No, capital is not different, in the sense that the design team’s decisions will determine how much capital is needed, just as their decisions affect variable costs.  However, at best, engineering teams will only consider capital as completely separate from the “Piece Part Price.”  Many engineering departments do not consider capital in any serious manner at all.

This leads to perverse decision making.  Why?  Typically, investment in capital will reduce the variable cost of a part, and there are often multiple ways to make a part.  For example, let’s say that you are Joey Bag O’Donuts design engineer, who has been given challenging cost targets for Piece Part Cost.  You design a part and your purchasing guy comes back with quotes from 3 suppliers: 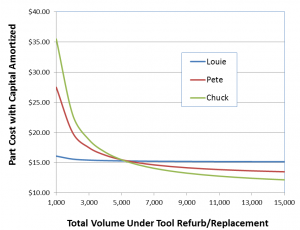 * Redesign will be required to use Chuck as a supplier

Of course, capital is “considered” by Joey’s engineering team, but it’s hard to comprehend because it is considered separately from variable costs.  Joey would likely choose Pete as a supplier because Pete is cheaper on Piece Part Cost.  Joey won’t have to redesign as he would if Chuck was Joey’s supplier.  Joey’s Cost Target is based on Piece Part Cost.  Sure, his supervisor tells him to “watch the capital,” but the capital budget is this big amorphous pot of money that everyone shares, so Joey is not personally penalized for using it.

However, using a bit of eighth-grade math, we can graph the real cost to the company, including the capital amortized over the life the tool.  We see that the right decision for maximum product profit depends on the volume of products we will sell before more capital needs to be spent to refurbish or replace the tool.

The attitue of most product development teams towards capital shows that they implicitly believe capital is LESS important than the Piece Part Cost.  However, I would argue that the opposite is true for at least 3 reasons:

These are just three reasons why capital is an expensive cost that should be considered as part of product cost and considered together with piece part cost.  There may be others, too, but at the end of the day remember:

Cars are not free and neither is the capital tooling for your product.

This advice may help keep you out of jail and/or the world of unprofitable products.

Don’t Pave the Cowpath; Plan the Autobahn (Part 3 of Pete Schmitz at Harley-Davidson)

Do you hear the voices? (Voices Series, Part 1)